Would you really want to know? 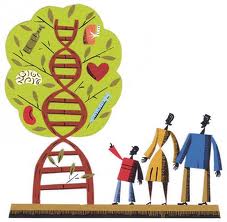 Genetic testing and disease: Would you want to know?

The story is about Kristen Powers who has decided to have a genetics test to see if she has inherited the DNA for Huntington’s disease.  Since this disease is similar in many ways to Kennedy’s Disease (neurodegenerative, progressive, rare, similar DNA defect, no treatment or cure, etc.), I found the article interesting because it discusses the personal perspective of being tested as well as other considerations.

The article goes into why some people want to be tested and many of the pros and cons of being tested.

“Gone would be the days of waiting to develop a disease. People would know about diseases they are at risk for and could change their living habits or consider treatments. Opponents warn about the potential for invasion of privacy — threatening employment and insurance — and the possibility that people equipped with the knowledge of their genetic makeup might make risky and unhealthy decisions.”

“Kristen doesn't want the gene to be passed on again. She says she won't have children if she tests positive: "I can be candid with potential partners and be responsible," she says.  Genetic counselors warn about the emotional impact of testing on the person and family.  "Some people like to plan everything out," says Brenda Finucane, president of the National Society of Genetic Counselors. "They think the information is empowering, while some people want to see how life plays out."

“Ed Powers backs his daughter Kristen’s decision to find out whether she inherited the gene for Huntington’s disease, but he also wonders how a positive result might affect his family’s health insurance. “I hope ObamaCare takes care of us,” he says. The Supreme Court is expected to rule on the fate of the Affordable Care Act in June.  About 30 million Americans live with rare diseases, many of them chronic. People afflicted with these diseases often have difficulty obtaining coverage, or the policies are cost-prohibitive. The health care law created the pre-existing condition insurance plan (PCIP) for Americans denied coverage by private insurance companies for health reasons. PCIP is currently in effect.  If the law is upheld, all Americans, regardless of health status, will have access to insurance by 2014 through an employer or in the marketplace, says the Department of Health and Human Services. Insurers will be prohibited from charging more or denying coverage to anyone. The law also eliminates annual and lifetime insurance caps.”

I encourage you to read the USA Today article.  ‘Knowing or not-knowing’, that is the question. Since there currently is no treatment or cure, what would you do differently if you knew that you or one of your children had the defect?

More importantly, if one of your children is going to be tested (their wish or yours),  I would highly encourage both of you to discuss the issue with a genetics counselor ahead of time.  A counselor can: