I mentioned in my previous post, SphincterWeakness, the ALS Association’s PDF guide on Swallowingand Swallowing Disorders. Several readers asked questions concerning swallowing issues they are experiencing. Until I read the guide, I never understood how complicated the entire process is and the coordination needed, both voluntary and involuntary, to make the process successful. Today’s post is taken from the guide and is a primer on the swallowing process. I hope you find it as interesting as I did. 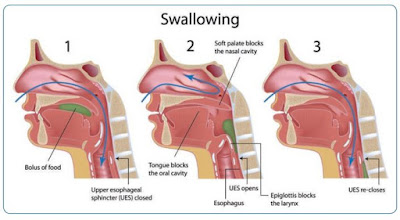 The swallowing process has been divided into four conceptual stages, namely the oral preparatory, oral, pharyngeal, and esophageal stages. Typically, food and liquid pass from our mouth and through our throat in less than two seconds, however, the sequence of events is very involved. The following events occur during each stage:

Oral Preparatory Stage: Food is placed into the mouth either with a feeding utensil (fork or spoon), fingers, cup, or straw, and then is chewed and prepared for swallowing. This typically involves a hand-to-mouth transfer motion as food is taken from a plate and placed into the mouth, or when a cup is picked up and placed at the lips for drinking.

Oral Stage: The muscles of the mouth, jaw, and tongue work to prepare the food material for swallowing. This involves chewing and grinding food materials into smaller participles. During chewing and grinding of food materials, your saliva mixes with the ingested material to aid in forming a cohesive “bolus” that can be easily swallowed. Once the bolus is formed, muscles of the tongue work to push the food/liquid from the front to the back of the mouth and towards the throat.

At this time, it is important for the lips to tightly close or seal off the mouth and for the muscles of the roof of the mouth (soft palate) to close off the entrance to the nose (nasal cavity). This ensures that food and liquid are directed into the throat and ensure that it does not escape out of the mouth or the nasal cavity.

Pharyngeal Stage: Once the ingested materials pass the tonsils, the pharyngeal stage of swallowing begins and the swallowing process becomes involuntary (not under your conscious control). The cylindrical throat muscles squeeze to help push the food from the upper throat, through a ring muscle at the bottom of the throat surrounding the opening of the food pipe (medical term: sphincter), into the food pipe (medical term: esophagus).

During this stage of swallowing, entrance to the airway (medical term: trachea) is protected by a flap of cartilage called the epiglottis. This flips over (down) during the swallow to route food/liquid away from the airway and towards the stomach and has often been referred to as the “guardian angel” of the airway. Two additional barriers occur during this stage to protect your airway, consisting of the closure of both the false and true vocal folds at the entrance to your trachea or airway.

Esophageal Stage: The ring muscle that divides the throat from the entry to the food pipe (medical term: Upper Esophageal Sphincter or UES) is usually closed to prevent 1) air from entering the stomach and 2) previously ingested food and liquid materials from coming back up into the throat (reflux or regurgitation). This sphincter briefly opens or relaxes during the swallow and at the start of the esophageal stage to allow both food and liquid to enter the food pipe (Figure 1). Once food or liquids enter the esophagus, or food pipe, a contraction of the muscle helps to move the food from the top to the bottom of the pipe (21-27 cm in length) and into the stomach.

I have not been diagnosed with Achalaisa, but I was told my lower esophageal sphincter muscle is not working properly causing several issues with swallowing and choking. The doctor associated the weakened muscle with KD.

I was told to change my eating habits to minimize the impact of the weakened sphincter muscle on my swallowing. The recommendations include:

1. Stop smoking.
2. Avoid foods or beverages that give you heartburn.
3. Drink plenty of fluid when eating.
4. Chew your food well.
5. Eat more frequent, smaller meals.
6. Avoid eating for three hours before you go to bed. 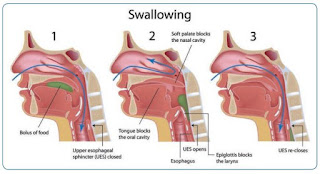 I also was given some swallowing exercises that I practice daily that seem to help.

The ALS Association has published a good resource on this subject. ALS Manual on swallowing and choking. It is a PDF.

I am trying to keep up on the evolution of CRISPR and its possible performance in curing or treating Kennedy's Disease and other progressive neuromuscular disorders. Here is the latest from The New York Times. To read the entire article, click on the link above or the heading below.

How Cells Fend Off Gene Editing 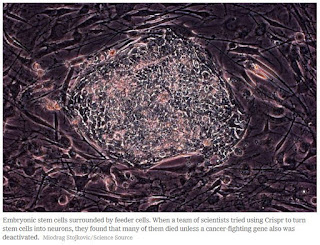 The findings, reported in the journal Nature Medicine, at first appeared to cast doubt on the viability of the most widely used form of gene editing, known as Crispr-Cas9 or simply Crispr, sending the stocks of some biotech companies into decline on Monday.

Crispr Therapeutics fell by 13 percent shortly after the scientists’ announcement. Intellia Therapeutics dipped, too, as did Editas Medicine. All three are developing medical treatments based on Crispr.

But the scientists who published the research say that Crispr remains a promising technology, if a bit more difficult than had been known.

“The reactions have been exaggerated,” said Jussi Taipale, a biochemist at the University of Cambridge and an author of one of two papers published Monday. The findings underscore the need for more research into the safety of Crispr, he said, but they don’t spell its doom.

“This is not something that should stop research on Crispr therapies,” he said. “I think it’s almost the other way — we should put more effort into such things.” ...

... A team of scientists at the Novartis Institutes for Biomedical Research in Cambridge, Mass., got similar results with a different kind of cells, detailed in a paper also published Monday.

They set out to develop new versions of Crispr to edit the DNA in stem cells. They planned to turn the stem cells into neurons, enabling them to study brain diseases in Petri dishes.

Someday, they hope, it may become possible to use Crispr to create cell lines that can be implanted in the body to treat diseases.

When the Novartis team turned Crispr on stem cells, however, most of them died. The scientists found signs that Crispr had caused p53 to switch on, so they shut down the p53 gene in the stem cells. ...

...“We should definitely be cautious,” said George Church, a geneticist at Harvard and a founding scientific adviser at Editas.

He suspected that p53’s behavior would not translate into any real risk of cancer, but “it’s a valid concern.”

And those concerns may be moot in a few years. The problem with Crispr is that it breaks DNA strands. But Dr. Church and other researchers are now investigating ways of editing DNA without breaking it.

“We’re going to have a whole new generation of molecules that have nothing to do with Crispr,” he said. ...
No comments: Links to this post

Is it time to Remodel?

I read on Facebook the other day that someone was planning on remodeling their bathroom to accommodate their needs. This brought to mind something I wrote in the past on the subject, and I updated it below.

The top ten reason for wanting to remodel (a humorous approach): 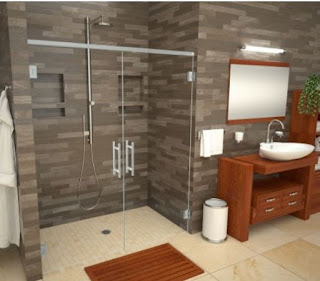 Move or Improve? That is the question.


People remodel because they love their home or their neighbors or they are close to family and friends. Home improvements are usually a sound investment (up to a point). For example, a report states that the return rate on a remodeled bathroom is 88%. The rule of thumb is “don’t spend more than 5% of your home’s value on remodeling any one room. However, most people with a neuromuscular disease are more concerned about safety and accessibility than resale value.

Wheelchair accessible homes are few and far between. There are not a lot of them out there and normally people do not advertise them as such for concerns that others buyers will not be interested.

Consult with and hire professionals


If you are thinking of building or a major remodel, consult with an expert(s). Occupational Therapists  (OT) are very helpful in determining your needs today and into the future. If you have a progressive disorder, never, I repeat - never, attempt to remodel to satisfy your current needs. Your OT can help you look out three to five years and determine what is needed today and in the future.

Once you have an idea of what is needed, architects can offer more ideas about design, space and what is available. Architects interpret your wishes into technical terms for the contractor to follow. 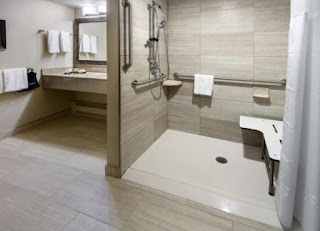 Seek out others who have recently remodeled

Word of mouth recommendations are gold. Discuss 'dos and don'ts' and lessons learned with others who have previously remodeled. Kennedy's Disease on Facebook, the local MDA and ALS organizations, and friends who have friends are excellent resources for this. They have first hand experience as to what worked, what they would do differently had they known, and other gems of information. 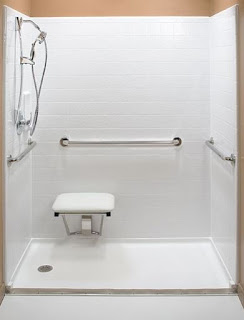 Guidelines for hiring a contractor

Once you are ready, take your time and find a contractor you feel comfortable with. Once again, word of mouth recommendations from others you know are helpful. Look for contractors who have experience in handicap renovations and additions. Ask to see photos of some of their work to gain and idea of what type of renovations they perform and the quality of the work.

New Medicare cards are in the mail 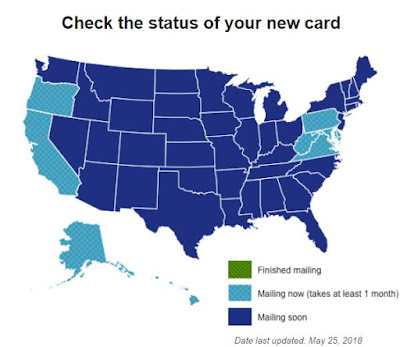 Watch out for scams

Medicare will never call you uninvited and ask you to give us personal or private information to get your new Medicare Number and card.
Scam artists may try to get personal information (like your current Medicare Number) by contacting you about your new card.
If someone asks you for your information, for money, or threatens to cancel your health benefits if you don't share your personal information, hang up and call us at 1-800-MEDICARE (1-800-633-4227).
Learn more about the limited situations in which Medicare can call you.- Opens in a new tab
Learn more about your Medicare card.- Opens in a new tab
No comments: Links to this post