Testosterone and the Human Body

In a 2011 blog article, I discussed testosterone. Little has changed three years later as to knowing its impact on the disease. Yet, it is widely accepted that the binding of testosterone to the defective androgen receptor in a person with Kennedy’s Disease is what brings on many of the symptoms. The following quote is from the KDA website: 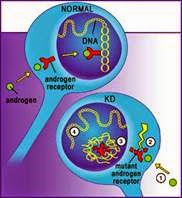 Healthline has a good page on the effect of testosterone on the human body. It explains how it affects a male in sixteen areas of the body.

“Testosterone levels affect everything in men from the reproductive system and sexuality to muscle mass and bone density. It also plays a role in certain behaviors.”
No comments:

Background:
- Spinal and bulbar muscular atrophy (SBMA) is an inherited disease. It causes weakness in muscles used for swallowing, breathing, and speaking. SBMA mainly affects men, but women can carry the gene for it. Researchers think there may be a link between SBMA and excess fat in the liver.

Objective:
- To look for fatty liver and liver injury in people with SBMA, people with motor neuron disease, and people who carry the gene for SBMA.

I found the below article fascinating. Some of the facts provided, I knew, but in total, it reflects how amazing the human body is. When we focus on a specific health issue, for example Kennedy's Disease, we tend to block out all of the other miracles that continue to take place within our body.

The human body is an incredible thing. Some of these facts may be hard to believe, but they are happening, inside of you, right now.

1. Human fingers are so sensitive, that if your fingers were the size of Earth, you could feel the difference between a house and a car.
2. When a pregnant woman suffers organ damage (such as a heart attack), the fetus sends stem cells to the damaged organ to help repair it. And women who have previously been pregnant show neurological protection against certain diseases.
3. With the 60,000 miles of blood vessels inside the average human body, you could circumnavigate Earth two and a half times.
4. The human eye is so sensitive that if the Earth were flat, you could spot a candle flickering at night from up to 30 miles away.
5. Nerve impulses travel to and from the brain at speeds of up to 250 miles per hour, faster than a Formula 1 racecar.
6. When you blush, the lining of your stomach blushes too.
7. The human brain can read up to 1,000 words per minute.
8. Inside your belly button are thousands of bacteria that form an ecosystem the size of an entire rainforest.
9. When in love, the human brain releases the same cocktail of neurotransmitters and hormones that are released by amphetamines. This leads to increased heart rate, loss of appetite and sleep, and intense feelings of excitement.
10. You can see ultraviolet light, the ability is just filtered out by the eye’s lens. Some people have undergone surgery to remove the lens and can detect ultraviolet light.
11. An adult is made up of 7,000,000,000,000,000,000,000,000,000 (7 octillion) atoms. For perspective, there’s a ‘measly’ 300,000,000,000 (300 billion) stars in our galaxy.
12. Our muscles are actually incredibly more powerful than they appear to be. Human strength is limited to protect our tendons and muscles from harming themselves. This limitation can be removed during an adrenaline rush, during which some people have lifted boulders or even cars off themselves.
13. We humans are the best long-distance runners on the planet. Better than any four-legged animal. In fact, thousands of years ago we used to run after our prey until they ran themselves to death.
14. A full head of human hair is strong enough to support 12 tons.
15. In 30 minutes, the human body gives off enough heat to bring a gallon of water to the boil.
16. We have the same amount of hairs on our body as a chimpanzee. Most are useless and so fine that they are invisible.
17. The atoms that make up your human body today are same atoms that formed during the Big Bang 13.7 billion years ago.
18. Human bone is as strong as granite. A block of bone the size of a matchbox could support nine ton of weight.
19. If the human brain were a computer, it could perform 38 thousand-trillion operations per second. The world’s most powerful supercomputer, BlueGene, can manage only .002% of that.
20. The focusing muscles in your eyes move around 100,000 times a day. To give your leg muscles the same workout, you’d need to walk 50 miles.
21. For every pound of fat or muscle gained, your body creates seven miles of new blood vessels.
22. Humans share 50% of their DNA with bananas.
23. Loneliness is physically painful. Just as you have a drive to avoid physical pain, you have a similarly powerful drive to connect with others and seek companionship - in order to avoid the pain of loneliness.
24. A single human sperm contains the 37.5mb of male DNA required to create a human child. That means an average ejaculation sees the transfer of 1,500 terabytes of information.
25. Your body produces 25 million new cells each second. Every 13 seconds, you produce more cells than there are people in the United States.
26. Humans are bioluminescent and glow in the dark. The light that we emit is 1,000 times weaker than our human eyes are able to pick up.
27. Humans shed 40 pounds of skin in their lifetime, completely replacing their outer skin every month.
28. In one day, your blood travels 12,000 miles around your body. That’s four times the distance across the US from coast-to-coast.
29. Our brain’s connected neurons look similar to the structure of the universe. In a way, our brains are modeled after the universe.
30. Around 90% of the cells that make humans aren’t “human” in origin. We’re mostly fungi and bacteria.
31. Along with the five traditional senses of sound, sight, touch, smell and taste, humans have 15 “other senses.” These include balance, temperature, pain and time as well as internal senses for suffocation, thirst, and fullness.
32. You’re a little richer than you might think. Inside all of us is around 0.2 milligrams of gold, most of which is in our blood Sadly, you’d need the blood of around 40,000 people to collect enough gold to make one 8g coin.
33. The human brain uses 20% of the entire body’s oxygen and calorie intake, despite only accounting for about 2% of an adult’s body mass.
34. If you stretched out the 300,000,000 capillaries in your lungs end to end, the line would extend from Seattle to San Diego, or about 1,300 miles.
35. Some women see more colors than everyone else. Most people have three types of color receptors to see color vision, while some women have four or even five of these receptors and can see a wider range of colors.
36. A condition called synesthesia can cause senses to overlap. In other words, some people can taste words or hear colors.
37. The need to breathe so much is due to carbon dioxide buildup more than the need for oxygen. If there was a different way to get rid of carbon dioxide from the blood, we would only need to breathe at a rate of about once per minute.
38. Crying alleviates stress and allows humans to decrease feelings of anger and sadness. It physically does help to let it out.
39. We also produce differently structured tears depending on the reason we’re crying. When put under the microscope, crying over grief, hope, or onions all produced a unique tear.