Can women have Kennedy’s Disease?

Over the last couple of weeks I received two emails from women asking if they could have Kennedy’s Disease. Both women thought that it only affected men.  One woman had previously been diagnosed with ALS.

Kennedy’s Disease is not gender specific. Both men and women can have the defective X-chromosome gene. It is rare, however, for women to show symptoms until later in their life. Also, symptoms for a woman are generally less severe.  My mother, for example, began to experience leg weakness and twitching in her early 70s. She also began experiencing swallowing issues.

Women are tested for Kennedy’s Disease the same way as men. Your family doctor can draw the blood and send it to a DNA lab for analysis.  If your doctor is unfamiliar with Kennedy’s Disease, you might want to print this web page that explains the DNA test (http://www.athenadiagnostics.com/content/test-catalog/find-test/service-detail/q/id/61 ). A DNA blood test normally takes about 4-6 weeks. 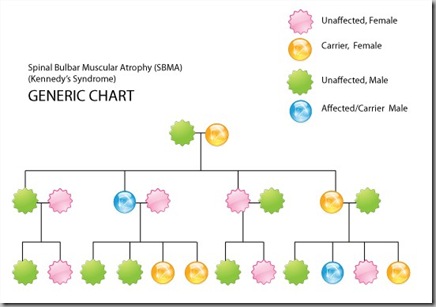 Should you have any questions, please don’t hesitate to ask.  If I don’t know the answer, I will try to find someone that can answer it for you.