The Dangers of Falling Increase


All of us living with a progressive neurological disorder are more at risk to tripping and falling. I found this in the Humana Newsletter. There are ten common-sense tips to help prevent falls. Awareness is critical. Think before you move.

What’s really at risk?
Falls can lead to bruises, pulled muscles and broken bones. That might not seem like a big problem, until you know what’s really at risk. Research shows getting hurt in a fall is more common than having a stroke.

There’s good news!
Research also shows that if you avoid broken bones, you’re likely to have less chronic pain as you get older. You’ll also be able to get around more easily by yourself. Talk to your doctor about steps you can take to reduce the chance you will fall or break a bone - or keep from falling again. 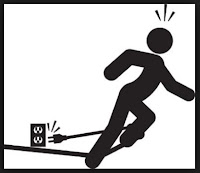 NORD and Trio Health to Provide Real-World Insights to Improve Access and Quality of Care for More Than 7,000 Rare Diseases 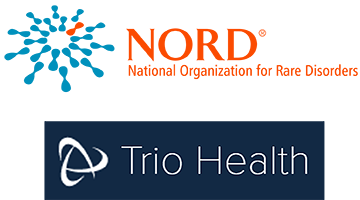 “If an FDA-approved treatment exists, patients deserve to have access to it,” said Peter L. Saltonstall, president and CEO of NORD. “No one is doing anything like this to serve the 1 in 10 Americans with rare diseases and we are thrilled to partner with Trio Health as part of NORD’s advocacy and patient assistance efforts.”

The collaboration creates the first common system for gathering data on treatment access and outcomes to produce insights that improve quality of care.  It marries NORD’s commitment to patient advocacy and improving access to therapies since its founding 33 years ago with new opportunities to leverage data-driven insights. Drug manufacturers and patient advocates will have the ability to gain insights into the overall patient experience, and the unforeseen roadblocks that can undermine effectiveness.

“Our joint goal is to bring transparency to the entire patient journey,” said Brent Clough, CEO of Trio Health, which has been providing similar real-world data on more common diseases since 2013. “Trio Health is honored to partner with NORD and fill a critical knowledge gap that can ultimately improve patient care.”
No comments: Links to this post

The Story Behind the Name


Many people ask where the name Kennedy’s Disease came from. I found an updated explanation recently on Medscape that you might find interesting.

“Kennedy disease (KD) is named after William R. Kennedy, MD, who described this entity in an abstract in 1966. The full report followed in 1968. The history of this entity is summarized briefly here by way of a personal memoir from Dr Kennedy to the author.

Three months after completing his residency in neurology at the Mayo Clinic in 1964, Dr Kennedy examined a 57-year-old man of French and Native American ancestry from Minnesota who had been having problems with weakness for over 20 years. At that time, Dr. Kennedy had just taken a faculty position at the University of Minnesota where he has remained for his professional career. Other affected family members were identified, and an extensive pedigree developed. Dr Kennedy recalled, "This was an exciting patient! As a resident I had reviewed the entire Mayo Clinic film collection of patients, and every muscle and nerve biopsy taken before 1964, but I had not encountered this disease. I thought I knew how to document this patient. But I had never performed a muscle biopsy, had never photographed a patient, and had never used a motion picture camera."

Two months later, a similar patient, a 68-year-old man from Iowa, was referred for evaluation. Again, the patient's family history was positive, and Dr Kennedy noted that this patient's clinical picture closely resembled that of the previous patient. Evaluation of both families included his loading an electromyograph (EMG) into a car and driving to Iowa. (The present author had a similar experience when evaluating another affected family with Dr Kennedy in northern Minnesota in 1979. Performing clinical evaluations and EMG in the field is challenging work.)

Dr Paul Delwaide, a Belgian neurologist, first used the appellation Kennedy disease in a 1979 paper. In the author's discussions over the years with Dr Kennedy, he tended to downplay the use of eponyms for diseases. When the author recently asked him again about "his disease," he admitted that now, as he grows older, "It feels kind of good."

In 1982, Harding et al reclassified the disease as X-linked bulbospinal neuronopathy to reflect the sensory conduction abnormalities noted in several of their cases. Although the concept of the disease has been broadened, it remains an X-linked disorder with the hallmark of progressive weakness of the limb and bulbar musculature. Additional neurologic features include sensory abnormalities, tremor of the upper extremities, and a quivering chin. A number of patients also have various endocrinologic abnormalities, such as diabetes, testicular atrophy, gynecomastia, oligospermia, and erectile dysfunction.

In 1986, Fischbeck et al reported the genetic defect to be at the DXYS1 marker on the proximal long arm of the X chromosome. This was later characterized as an expanded tandem (cytosine-adenine-guanine [CAG]) repeat in the first exon of the androgen receptor gene.“


About once a month for about twenty years, my wife and I would get in the car on a Saturday morning and get lost. We would find a road we had never been on, and just go. We wouldn’t look at a map and we would stay off major roads. If something sounded interesting, we’d stop and explore it. It was always challenging and fun. 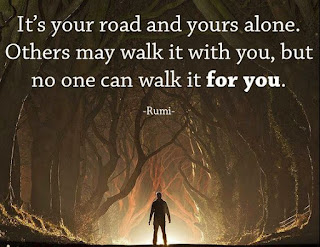 I ran across this saying from Rumi that is appropriate for those of us living with a progressive disorder. The road that we travel has no roadmap to follow. We discover things about ourselves almost every step of the way.

The words of power for today are:

I decide how I will live my life

I refuse to be a victim

When I was going through Survival (SERE) School before going to Vietnam, the instructors put us through three weeks of hell. At first, it didn’t seem too difficult, but over time the continued assault on our bodies and mind wore us down. We began to doubt many assumptions. What was initially just a game became very real.

When we had gone a couple of days without a meal, an instructor told us about this rheostat in our brain. He explained, “This rheostat allows us to perceive things differently.” He pulled a worm from the ground and said, “Can you imagine eating this?” He went on to explain that at some point in our training we are going to be hungry enough to be thankful for having this worm to eat. During the three weeks of survival training, that rheostat changed many perceptions.

It is no different today. I decide if I want to play the victim card or if I want to rise above the restrictions placed upon my body.

What was, or should be, doesn’t matter in how I live today
No comments: Links to this post


JAMA Neurology published the following article in 2012. Another person living with Kennedy’s Disease recommended the article to me. The paper does a good job of explaining the condition to the layperson. 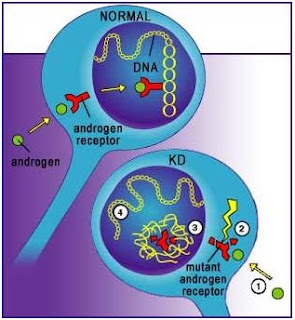 “Spinal and bulbar muscular atrophy (SBMA), or Kennedy disease, is an adult-onset lower motor neuron disease characterized by slowly progressive muscle weakness and atrophy. The disease is caused by the expansion of a trinucleotide CAG repeat encoding a polyglutamine tract within the first exon of the androgen receptor (AR) gene. During the 2 decades since the discovery of the AR gene mutation in SBMA, basic and clinical research have deepened our understanding of the disease phenotype and pathophysiology. Spinal and bulbar muscular atrophy exclusively affects men, whereas women homozygous for the AR mutation do not fully develop the disease. The ligand-dependent nuclear accumulation of pathogenic AR protein is central to the pathogenesis, although additional steps, eg, DNA binding and interdomain interactions of AR, are required for toxicity. Downstream molecular events, eg, transcriptional dysregulation, axonal transport disruption, and mitochondrial dysfunction, are implicated in the neurodegeneration in SBMA. Pathogenic AR-induced myopathy also contributes to the degeneration of motor neurons. Several potential therapies, including hormonal manipulation, have emerged from animal studies, some of which have been tested in clinical trials.”

A work in progress


This is part two of my “Words of Power” series.

The following statement is the springboard for change in my life.

I won’t let any person or situation ruin my day

If I believe this, then …

I choose how I respond to every situation

If I regularly remind myself that nothing is going to ruin my day, it becomes much easier to choose how I react to any given situation.

If I elect to take a deep breath and count to ten before responding, my perspective of the situation can change. And, if my perspective changes, it can change for others that are involved. My reaction (response) can make the difference as to how the rest of the day will play out for me.

This process continues to be a work in process for me. I am substantially better than I was just a year ago, but there is still work needed.

For example, if something happens that I consider negative, I can be angry, frustrated, hurt or disappointed. This week’s experience to test my belief in the process started with my wife finding a nail in my van’s tire. I was initially disappointed and a little frustrated, but I decided that nothing was going to ruin my day. I felt the situation was actually positive because the tire wasn’t flat. I could still drive it to the tire shop.

So, everything was good. I called the shop to see if I could get in that morning and they said bring it down. All good, right?  When I arrived at the shop, there were only two people waiting. Still good, right? Well, two hours later my van was still waiting to be worked on. I reminded myself that it could be worse. And, finally, three hours later the tire was repaired. I kept reminding myself this was all good as I paid my bill and drove home.

Well, something wasn’t right because when I arrived home, I was frustrated. And, when my loving wife tried to empathize, I misunderstood her intentions. So, I ended up letting something that I had no control over decide my day as well as my wife’s day. Not good. Apologizes were needed and the point of this post proven.

As I mentioned, it is still a work in progress. J
No comments: Links to this post