An article written by Amy Madsen for MDA’s Quest Magazine describes a pilot trial using Clenbuterol for a treatment for Kennedy’s Disease (SBMA). To read the entire article, follow this link: Clenbuterol Study.


Results from a 20-person pilot trial suggest that clenbuterol may improve motor and respiratory function in people with spinal-bulbar muscular atrophy, but safety concerns were raised. 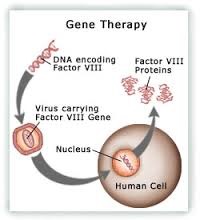 Stem cell research is one of those volatile areas where it seems that about half the population is for this research and half is opposed to it. For many of us living with Kennedy’s Disease, stem cell research is an area of interest that we would like to see explored more thoroughly because of the opportunities it might hold.

It has been noted that one of the difficulties of using stem cells for motor neuron disease is the delivery vehicle. How do we implant healthy cells into the muscles? A question that also lingers is whether the healthy cells that are introduced will remain healthy, or will they become defective over time?

MDA’s Quest Magazine published an interesting article on the status of current gene and stem cell research in regards to neuromuscular diseases. Click on this link to read more on this subject: Moving Toward Next Generation Gene Therapy .

In my opinion, this appears to be an opportunity for advancing research on rare disorders.

Humana’s ‘Caring for Health’ newsletter this month had an interesting article called “Coping with a loved one’s decline.” The article’s focus is on longer life expectancy and older people living with chronic conditions … and the role that family caregivers face. Those of living with Kennedy’s Disease encounter many of these same issues.

It starts out commenting that the emotional toll of functional decline can be challenging for caregivers. “It is important to take note and to try to understand the meaning of behaviors, to reduce risks and liabilities, and preserve the older person’s dignity and quality of life.” This means that prior to a crisis, caregivers need to:

As most of our family members know, caring for a loved one with a progressive disorder is never easy. The article recommends the following strategies to help reduce stress and improve communications.

As a caregiver, it is just as important that you acknowledge your own feelings and emotions that relate to the loved one’s decline. Seek out help for depressive symptoms. Keep active and nurture your social support system so that when you need help, others are there for you. Accept that you have limits and no when you have reached them. Schedule time that you are not required to be a caregiver and participate in things that you enjoy doing, are relaxing, and help reduce stress.

And, most important, know your limits and don’t be afraid to ask for help.

Back to the Basics

What is Kennedy’s Disease? 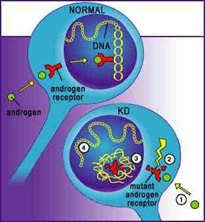 Kennedy’s Disease (also known as Spinal Bulbar Muscular Atrophy, SBMA, or Kennedy's Syndrome is a rare adult-onset progressive neuro-muscular disease. It is caused by a mutation in the CAG Repeats that affects the function of the androgen receptor. Both the spinal and bulbar neurons are affected causing muscle weakness and wasting (atrophy) throughout the body which is most noticeable in the extremities (legs/arms), it is also noticeable in the face and throat, and can cause speech and swallowing difficulties, along with major muscle cramps as well as other symptoms.


When does a person first start seeing signs of the disease?

Symptoms usually beginning to appear in men between the ages of 30 and 50. However, onset has also been reported as early as in the teens and as late as the 60s.


Who gets Kennedy’s Disease?

Kennedy's Disease is a genetic disease, passed on from generation to generation in a family. Follow this link for a chart reflecting the genetics of the disorder. Generally males who inherit the defective gene exhibit full symptoms, while females are carriers. Females may also exhibit some symptoms, but normally much later in life.


What are the symptoms?


Why haven’t I heard of Kennedy’s Disease before?

Kennedy’s Disease is considered a ‘rare disorder’. It is estimated that only 1 in 40,000 individuals worldwide have this condition. However, many people go misdiagnosed or undiagnosed for years.

Being Misunderstood – The rocky road to acceptance

Acceptance is a topic I have written about many times and is the core concept behind my blog. The article below struck a note with me recently because of all the emails that the KDA receives from the spouses, significant others, family and friends of a person living with Kennedy’s Disease. Many of these emails reflect frustration by the individual because the loved one with KD won’t:
The above examples go to the foundation of ‘acceptance’. Many of these frustrations arise from both parties being misunderstood. The loved one is upset because the person with KD will not listen. And, often, based upon my experiences, the person with KD is upset because the loved one doesn’t understand why he is not ready to accept the issue being discussed. Terms like ‘stubborn’, ‘will not listen’, and ‘I am so worried something bad will happen’ are often used.

Manal Ghosain’s blog article on being misunderstood is relative to what is happening often within the family unit as the disease progresses. Prior to the section shown below, Manal explains in a short story what happened to him one day that forced him to take a look at how he was responding to someone that misunderstood him. If you find the section below interesting, follow the link to read the entire article or other articles on other interesting subjects.

Misunderstood? How to Let Go of the Need to Explain Yourself

Thoughts and feelings about being misunderstood

The first thing that came to mind was that what was written in the message wasn’t my opinion. It was my friend’s view of my opinion–through his own filters and perspective. It had nothing to do with me or what I said.

Had I tried to explain my position further, he would’ve still picked on what he wanted to hear and not necessarily what I wanted to say.

I felt angry that I was misunderstood. I felt that my friend should’ve given me the benefit of the doubt. I thought he knew me better than that.

After more writing, I realized that my feelings of anger and not wanting to be misunderstood were based in fear. I felt afraid that I was perceived as not smart enough, rational enough or politically informed enough.

After reflecting on my fears, I realized that—to me—being understood means being appreciated or at least accepted. Validation is another elusive goal that the more you seek it, the less you feel it. It’s a trap.

How do you move past being misunderstood?

After processing my findings above, I came up with the following pointers. I hope you find them beneficial.

2. Realize that others’ views of your opinions don’t diminish your worth.
You are who you are and you’re entitled to your thoughts and views. Your opinions are not who you are. They are the position you hold at this moment, which may change subsequently.

3. It’s okay to be misunderstood.
The newspapers and tabloids thrive on misquoting and manipulating words. In our daily interactions, others will take what they’ll take from the conversations. There is nothing you can do about it. And if they don’t like what you have to say, so be it.

4. Feel the emotions without rationalization.
As much as we’d like to think that we humans are a rational species, we are not. We’re highly emotional and a lot of what we say or do is driven by emotions.

You can waste all the time in the world trying to understand why someone misconstrued what you said. In all likelihood, what you expressed triggered a defensive response in them. It has nothing to do with you. So focus on how you feel.

Also, realize the more important the person to you, the higher the emotional charge. Don’t try to argue with how you feel.

You may feel angry, upset, fearful, disappointed, hurt, betrayed or any other emotion. Allow—feel and then feel some more. Write about your feelings; meditate on them, or just sit quietly and allow them to go through you. Take your time—there is no shortcut for releasing your emotions.

5. Write an imaginary response.
If you feel you need to express more of your thoughts and feelings write them in a letter. What would you say to the person who you feel wronged you? Write what you would want to tell them and how the interaction made you feel.

There is an amazing release that comes from putting thoughts and words to paper.

6. Sleep on it.
If you decide you want to respond and you want to discuss the issue further, don’t do it right away. Think about what you want to say and maybe even draft a response as mentioned above. Give yourself a few days.

You will be surprised by how fast you may cool off and change your mind. In all likelihood, you will dismiss the issue and move on.

7. Let it go.
After all is said and done, let the whole issue go. Don’t hold a grudge or keep bringing it up. You don’t want to add fuel to a fire in your heart.

If the other person was not happy with your decision, it’s their problem not yours. You cannot satisfy someone who is adamant about having an argument. Do yourself a big favor and don’t engage in further discussion.

Sometimes the best opinions are the ones that remain unexpressed. You know who you are and what you stand for. Instead of engaging in trying to explain and validate your opinions, move on and do something that is more meaningful to you.

Letting go is freedom. You can’t force anyone to see your point of view. However, you can drop the issue and let go. It’s always in your hands.
No comments: Links to this post