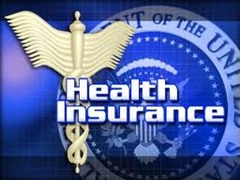 The new health insurance program being implemented will impact many Americans – some positively and some negatively. Some of the information available has changed substantially over the last year as states have adopted the new program or rewrote their current programs. I also believe programs and regulations will continue to change over the next few years as the program is rolled out.

NORD, the National Organization for Rare Disorders, has added a new section to its website that provides health insurance and related information. This resource will list information for each state and will be updated as new information is made available.

If you, or someone you know, is in the market for health insurance, please follow this link to the NORD website: State-by-State Insurance Information

The following abstract is from PubMed.  The more cases of Kennedy’s Disease, the greater the emphasis on clinical research to find a treatment and a cure.

Kennedy's disease is an X-linked recessive disorder with onset in adulthood, characterized by progressive degeneration of spinal motor neurons due to a dynamic mutation in the androgen receptor gene. We report three families (five cases) characterized by progressive weakness involving both limbs and bulbar muscles, atrophy, tremor, cramps and endocrinologic disturbances; the neurophysiological studies demonstrated second motor neuron impairment. The molecular analysis identified abnormal CAG repeats expansion in the androgen receptor gene (AR) in all cases. Clinical features were consistent with other previous reports. These are the first Peruvian cases of Kennedy´s disease with confirmed molecular diagnosis.
No comments: Links to this post

The MDA announced today that they awarded a research grant to Dr. La Spada to further study the what happens to the process of autophagy for those of us with Kennedy’s Disease. The following two articles are found on the MDA website.
-

Two studies, both at the University of California, San Diego, examine the important role of protein recycling in SBMA. Cells rely on a process called autophagy (awe-TOF-uh-gee) to break down and recycle large proteins and subcellular structures. Autophagy is critical for cell health, but relatively little is known about the process in motor neurons, the muscle-controlling nerve cells that are affected in SBMA and other diseases, including ALS and SMA.

In SBMA, proteins misfold and accumulate in motor neurons. Autophagy should take care of these accumulated proteins before they cause problems, but the process appears to be disrupted in SBMA. The goal of both projects is to learn more about the regulators of autophagy in motor neurons and how that regulation goes awry in SBMA.

Insights from these studies will likely benefit work in ALS, in which misfolded proteins also accumulate.

(Additional information can be found below) 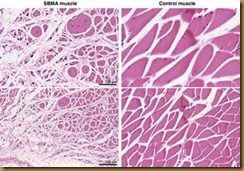 Muscles atrophy in SBMA and are a target for treatments that ultimately rescue motor neurons.
Spinal-Bulbar Muscular Atrophy (SBMA)

Albert La Spada, professor of cellular and molecular medicine, neurosciences and pediatrics at the University of California, San Diego, was awarded an MDA research grant totaling $300,000 over a period of three years to study the causes of neurodegeneration (loss of nerve cells) in spinal-bulbar muscular atrophy (SBMA).

SBMA, also known as Kennedy disease, is an adult-onset neuromuscular disorder affecting men. It is caused by a mutation in the gene for the androgen receptor protein, and it leads to the death of motor neurons, which are needed to control muscle contraction.

La Spada has created a mouse model and neuronal cell culture models of SBMA. He will now use these models to investigate how the SBMA-causing mutation leads to the death of motor neurons, focusing on changes in metabolism and impaired degradation of worn-out or defective proteins.
La Spada’s lab will test drugs that target a proposed regulatory factor and also will see whether blocking the erroneous androgen receptor gene instructions with compounds known as antisense oligonucleotides is beneficial. In previous work funded by MDA, La Spada’s lab has shown that directing therapies to muscle cells, rather than directly to the nerve cells that die in SBMA, can prevent the disease in mice.

“This exciting and unexpected finding represents an important step toward successful therapy development, as treatments that target muscle [instead of nerve cells] should be more straightforward to create, easier to test in patients and less likely to cause serious side effects,” La Spada says. “This key finding also suggests that a similar strategy is worth considering for related motor neuron diseases, such as spinal muscular atrophy (SMA) and amyotrophic lateral sclerosis (ALS).”

One of the possible symptoms as Kennedy’s Disease progresses is ‘dropping-head’ syndrome. Your upper-back, shoulder and neck muscles weaken to a point where it is difficult to hold your head up without support. Often, doctors unfamiliar with Kennedy’s Disease will prescribe a neck brace. Unfortunately, braces do nothing to improve the condition.

The figure below shows the increased weight of your head as it is drops to the front or back. 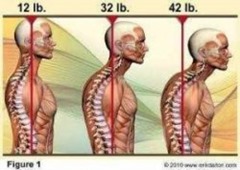 A physical therapist recommended the following exercises to strengthen the muscles needed to hold your head upright as well as reduce neck pain and fatigue. These exercises should be performed daily. Start slowly and only do as many reps as comfortable. It is helpful, especially at first, to have someone use their hand as the resistance. 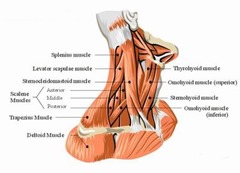 1.  Bend to the Chest:  Works the neck and shoulder muscles. While sitting, place your palm against your forehead. Lower your chin down to touch your chest, while having your palm apply resistance (holding your head up). Perform 10-12 reps (or whatever is
comfortable).

2. Pull the Head Up:  Works the neck and shoulder muscles. While sitting, clasp your hands behind your head and lower your chin down to touch your chest.  Raise your head up to the normal upright position, while having your hands apply resistance (holding your head down).  Perform 10-12 reps (or whatever is comfortable).

3. Side Turns:  Works the neck and shoulder muscles.   While sitting, place your left palm against your cheek and temple. Rotate your chin 90 degrees to the left while having your palm apply resistance (keeping your head from turning). Perform 10-12 reps (or whatever is comfortable). Switch to the right hand and perform the same exercise rotating to the
right.

4.  Bend to the Shoulder:  Works the neck and shoulder muscles.  While sitting, place your left palm against your temple. Lower your head towards your left shoulder (go about half way or 45 degrees) while your left hand applies resistance (to hold the head upright). Perform 10-12 reps (or whatever is comfortable). Switch to the right hand and perform the same exercise lowering your head to the right.

5.  Bend to the waist:  Works the back and neck muscles.  While sitting and with your hands at your side, slowly lower your chest to your knees while curling your chin into your chest.  As you slowly raise yourself back up to a vertical position, curl your neck up until you are looking at the ceiling (or sky).  Perform 10-12 reps (or whatever is comfortable).
3 comments: Links to this post