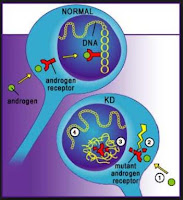 Any time I list the potential symptoms of Kennedy’s Disease, aka Spinal Bulbar Muscular Atrophy (SBMA), there is a tendency for someone to comment, “I have that. Do you think it’s Kennedy’s Disease?”

My answer is always the same. “I don’t know. You need to see your primary care doctor and discuss your symptoms with her/him.”

When my symptoms started, there was no DNA test for Kennedy’s Disease (SBMA). Most doctors and many neurologists did not know about SBMA. Neurologists put you through a series of tests, some not very pleasant, to help determine the cause of the symptoms. Most often, it was an educated guess based upon available evidence. In my case, I was diagnosed with ALS.

Several years later, another doctor diagnosed it as SBMA and sent me to see Dr. Fischbeck for a second opinion. I still remember walking into Dr. Fischbeck’s office that morning. He saw my gate, nodded his head, and said, “You have the walk.” He performed a DNA test and confirmed Kennedy’s Disease.

Today, because of the DNA test, a doctor can draw a little blood and send it off to a lab. Within a few weeks you will have an answer as to if you have Kennedy’s Disease. If not, you will still have to go through more testing, but at least SBMA is ruled out.

In regards to the list of symptoms below, those of us living with Kennedy’s Disease normally do not have all of them. We will have several and some might not appear until later in the progression. The most common early symptoms are severe cramping, hand tremors, unexplained fasciculations, and gynecomastia.

Please note there is a wealth of information available on the Kennedy’s Disease Association website (http://www.kennedysdisease.org/index.php/about-kennedys-disease/what-is-kennedys-disease).