The wind is underneath its wings again

In March I wrote an article about a Canadian goose with a broken wing. “Never Giving Up Hope” was as much about our being able to cope with living with Kennedy’s Disease as it was about this goose who never gave up trying to fly.

In the article I commented, “When the flock takes off each morning, the goose with the broken wing starts running on the water while flapping its wings hoping to gain some momentum that will help lift it into the sky. It might fly for five to ten feet before falling back to the lake or grass. And as the other geese fly off through the morning mist, the goose is left behind once again.

I am amazed that it never gives up trying to fly. Some instinct or desire is greater than the reality. The goose knows it must fly to survive for it is a creature of both the wind and the water.”

Over the last three months almost every day I watched this Canadian goose try again and again to fly. I cannot even count the number of times it crashed after five or ten feet of air-time. It always amazed me that no matter how bad the crash, it never gave up.

About a month ago dozens of more geese arrived for their annual molting and breeding visit. We now have over a hundred geese every day on the lake. And, the one with the broken wing is right in the mix. Two weeks ago I noticed that the mangled wing did not look quite as bad because several of the dead feathers were missing. I watched as the goose pulled and eventually yanked out another dead feather. The goose then stretched its wings … flapping until he gently lifted off the ground. 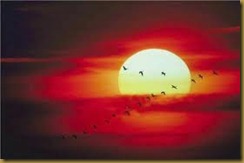 A couple of days later I watched as the giant flock took off for its morning flight. This time, however, the goose with the broken wing wasn’t left behind. It took off running across the dam, lifted off, and flew … and kept flying. I couldn’t believe the thrill that I felt and can’t even imagine what the Canadian was feeling about then.

That goose never gave up. Somehow it knew that it would fly again … and it did. Like the “Little Engine that Could” and the “Ant and the Rubber Tree Plant,” the Canadian overcame its handicap and found a way to soar once again.

Perhaps it was instinctual or maybe it was just luck. In the end, however, it really doesn’t matter. It was a beautiful sight to see and something I never expected. And, once again it gave me hope.