Last week I read an article (November 25 update) on the Leuprorelin trial.  What caught my attention was the following: “The drug candidate leuprorelin (pictured) has been shown to be safe in humans and could help treat the debilitating disease known as spinal and bulbar muscular atrophy.” Further down I saw the following comment: “Although the researchers found no statistically significant difference in swallowing function between the experimental and control groups, they observed that leuprorelin could be effective in patients that have had the disease for less than ten years.”

In past articles on Leuprorelin I had not read any observations that might prove interesting for those who have recently seen the onset of Kennedy’s Disease.   In the trial, 204 patients in 14 hospitals in Japan were involved in this 48 month trial.  Leuprorelin or a placebo were injected into the patients every twelve weeks.  The “could be effective” words stood out to me and tempered any excitement I might have initially felt.  Later there was a reference to a second trial focused on three swallowing tests that made me wonder if this was a report on the initial trial results that date back to 2007.  I then read the actual published report and grabbed the following comments:

“The mean difference in pharyngeal barium residue after piecemeal deglutition at week 48 was -3.2%, but there was no significant difference between the groups after covariate adjustment for the baseline data. In a predefined subgroup analysis, leuprorelin treatment was associated with a greater reduction in barium residue after initial swallowing than was placebo in patients with a disease duration less than 10 years.”

“INTERPRETATION: 48 weeks of treatment with leuprorelin did not show significant effects on swallowing function in patients with spinal and bulbar muscular atrophy, although it was well tolerated. Disease duration might influence the efficacy of leuprorelin and thus further clinical trials with sensitive outcome measures should be done in subpopulations of patients.” 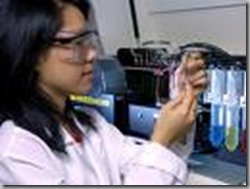 It appears the “measure” that was used for determining benefit was swallowing.  I did not read were anything else was used (i.e., walking, standing, stairs, cramping, strength tests, etc.).  Looking back on my progression, I do not remember having swallowing problems in the first ten years after onset.  Of course, I could just be a “rare bird” (the term my neurologist uses when introducing me to students).

I am aware that at least one man with Kennedy’s Disease is using Leuprorelin in the United States.  I hope he reads this article and determinations before continuing.