WikiPedia defines sleep apnea as a sleep disorder characterized by abnormal pauses in breathing or instances of abnormally low breathing, during sleep. Each pause in breathing, called an apnea, can last from a few seconds to minutes, and may occur 5 to 30 times or more an hour.


A few years ago I hosted a chat room discussion on sleep apnea.  My guest was Dave Hargett,  Sleep Activist Coordinator for A.W.A.K.E.  At the time, several men living with Kennedy’s Disease had mentioned that they had been diagnosed with sleep apnea.  The question foremost in their minds was whether Kennedy’s Disease caused sleep apnea.  The answer was, “No,” but he did say that sleep apnea is very prevalent in our society today.  Mr. Hargett recommended that anyone who felt they were having problems sleeping at night should check out their website at sleepapnea.org.  He also cautioned that anyone concerned should contact a medical professional to receive a diagnoses for any possible sleep related issues. 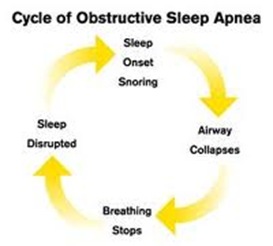 The concerns of those experiencing sleep disorders, and especially if it is sleep apnea, is the potential of experiencing memory problems, headaches, high blood pressure, weight gain, and increased risk of heart attack or stroke.  Mr. Hargett also mentioned that it could affect your work. 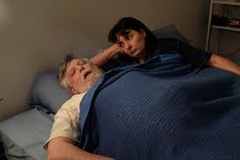 There is also another issue.  It concerns your spouse’s ability to get a good night’s sleep because you are snoring loudly and/or waking up periodically gasping for air.

A qualified medical professional can recommend a sleep-disorder specialist.  If needed, the doctor will recommend a sleep study either in your home or in a controlled laboratory.  If sleep apnea is confirmed, there are several potential treatments depending upon the severity of the issue.
Again, the key for those having difficulty sleeping, or the spouse is having difficulty sleeping because of your snoring, is to be properly diagnosed by a qualified professional.

Fortunately, I do not have sleep apnea, but I do have some problems sleeping.  Because of some blockage in the nasal cavity and since I am a “back sleeper,” I use nasal strips every night .  They make all the difference in the world to my sleep quality. 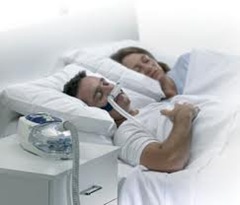 I know of several men that use CPAP devices today.  The have commented that the masks took some time getting used to, but they now swear by them.  Do you have sleep apnea or have you used a CPAP device?  If so, leave a comment so others can learn from your experiences.