Our sense of self

I just took a break from the rewriting of my book this morning to view another interesting video on TED – Ideas worth Spreading. The eighteen minute presentation recorded this year is by Antonio Damasio and the subject is: The quest to understand consciousness.

Short Bio:  Neuroscientist Damasio's research in neuroscience has shown that emotions play a central role in social cognition and decision-making. His work has had a major influence on current understanding of the neural systems, which underlie memory, language, and consciousness.

In this presentation he begins by explaining that “Every morning we wake up and regain consciousness -- that is a marvelous fact -- but what exactly is it that we regain?” Antonio Damasio uses this question to provide a glimpse into how our brains create our sense of self. It is fascinating because I never really considered ‘the sense of self’ ... where is comes from and how it works. His visuals helped better explain the interconnectivity of the brain.

It was also interesting to me, from a person living with Kennedy’s 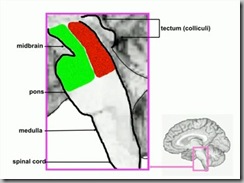 Disease, how certain parts of the brain stem impact your abilities to move and feel as well as create the mental state of a coma after a stroke, for example. The explanation of the coma state was fascinating, but the point he made about another state, ‘complete paralysis’, where you are imprisoned within your own body even though you have a conscious mind gave me pause.

If you have the chance, watch the video. It is well worth eighteen minutes of your time.