The following is a guest post from Ed Meyertholen.  For those who receive the KDA xPress Newsletter, you saw this article in the Fall edition.  Since the article is a little long for a blog, I am breaking it up into two parts.

One does not have to go very far to find articles dealing with stem cells. A 0.1-second Google search for “stem cell” returns over 31 million hits. These hits includes not only articles describing what stem cells are but also the possible use in helping treat a myriad of different maladies, from cancer and liver disease to spinal cord injuries and ALS. Also included are over 3.7 million hits dealing with the ethical issues of using stem cells. No matter what feelings you have about stem cell research, there is no doubt that that many believe that stem cells have the potential to revolutionize medical procedures – especially for those with neurological diseases.

In this essay, I will not venture into the ethical dilemma associated with stem cells but will restrict myself to the world of science. I will try to describe what are stem cells, how might they be employed to treat KD and what is the current state of the clinical use of stem cells for the treatment of neurodisorders. Since this is a fluid field and this is being written for a lay audience, some may find my simplifications too simple as I may have omitted some information. So please beware!

Stem cells are undifferentiated cells that have the potential to become almost any cell type. What does this mean? I expect that most of you know that the human body is composed of lots of individual structures called cells. It is estimated that there are between 50-100 trillion cells in a typical human. The ancestry of all of these cells in one person can be traced back to one fertilized egg. This egg cell undergoes many cycles of cell division that will ultimately produce all the cells in one’s body.

It is important to understand, however, that not all cells are the same. We have liver cells, kidney cells, brain cells and even big toe cells. While each of these different cell types originated from the same fertilized egg, the properties and functions of these cells are quite different from each other. A kidney cell cannot, for example, do the work of a nerve cell; different cell types have different structures and different proteins that are specific for their respective functions. If one was to follow the process by which an egg cell becomes a liver cell, one would discover that there are chemical mechanisms by which a nonspecific cell ‘becomes’ a liver cell. This is a highly studied area of cell biology and you can imagine a complex one as well. 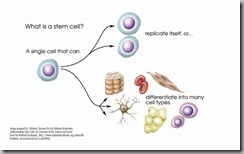 What makes this process more interesting and important is that some types of differentiated cells lose the ability to reproduce. Nerve cells are well known for this. In addition, for most nerve cell types (yes, there a many different types of nerve cells), there is no way in an adult to use new stem cells to make new neurons. This is because neuronal stem cells do not exist in most areas of the brain. Thus, once an adult loses a nerve cell, it is likely that there is no way to replace it and it and its function is gone for good.

In KD, for example, the key cause of symptoms is due to the death of motor neurons, a particular type of nerve cells that controls the contraction of muscle cells. There are no known mechanisms that are capable of naturally replacing a dead or missing motor neuron. Thus once it is gone, one loses the ability to use the muscle cells that it controlled and this ultimately is the cause of the symptoms suffered by KD patients.

This was the goal of the dutasteride and leuprorelin clinical trials. To replace a dead motor neuron requires the development of new techniques by which stem cells are directed to become motor neurons, and then these new motor neurons are injected into the spinal cord. It is hoped that the new motor neuron can then be induced to make the same connections to the same muscles as did the old, dead motor neuron. As you may imagine, this is a very difficult set of procedures and it presents researchers with a formidable set of problems that they must overcome before stem cell treatment will be SOP.