Are All Stem Cells Created Equal?

The following is part two of a guest post from Ed Meyertholen.  For those who receive the KDA xPress Newsletter, you saw this article in the Fall edition.  Since the article is a little long for a blog, I broke  it up into two parts.

Are all stem cells created equal?


To begin stem cell therapy, obviously, one needs stem cells. Where do they come from? How does a researcher get them? There are, it turns out, several different sources for stem cells.

1. Embryonic Stem (ES) Cells: ES cells are the type that are the most controversial. ES cells are harvested from an early embryonic stage. They are capable of forming almost every possible cell type as these cells are the ‘authentic’ stem cells. In practice, these cells are acquired from embryos formed by in vitro fertilization (IVF). This is the same process by which infertile couples attempt to get pregnant using IVF.

The value of ES cells is that they truly can be differentiated into any cell type. In the case of KD, for example, they could be differentiated into motor neurons. These motor neurons could then be injected and hopefully, they will find the right area of the spinal cord, begin to mature and grow and make the correct neural connections to the muscle cells. In this way, they would replace the missing cells which should relieve the symptoms of KD.

2. Neural Progenitor Cells (NPC): These are a subtype of stem cells 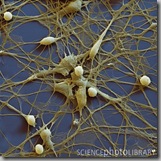 that essentially are partially differentiated into stem cells that can only become neural cells. These are found in more mature fetuses and in certain parts of adult brains. They can also be formed from ES. It is possible that these cells could be obtained from post-mortem brains or even collected from the brains of individuals undergoing neurosurgery.

It is believed that these cells can be induced to differentiate into almost any neuronal cell subtype, including motor neurons. Like ES, the NPC’s can be maintained and differentiated in a petri dish and then injected into patients.

3. Mesenchymal Stem Cells (MSC): These are stem cells isolated from bone marrow. These cells are primarily precursor cells for creating different types of bone and cartilage cells. There is evidence that it might be possible to ‘re-educate’ them to form nerve cells.

4. Induced Pluripotent Stem (iPS) Cells: These are cells that are  generated from adult tissues (often a cell known as a fibroblast) and are reprogramed to become stem cells. Ideally, this would be a great way to obtain stem cells, however, there are technical and safety issues that need to be worked out before this becomes a viable source of stem cells.

Stem cell technology has great potential especially in regard to the treatment of diseases such as KD. We are, alas, many years from the realization of this potential. There are still several major technical barriers that must be overcome before it will be a viable therapy. For example, if one forms motor neurons from either ES or NPC, these will not have been derived from the patient’s own cells, thus there is a good potential for tissue rejection. On the other hand, if the cells a derived from the patient’s own cells (as would be the case for MSC or iPC), the cells that are injected would contain the same genetic defect of the cell that has died.

Another issue is how do the injected cells know where to go? In KD, there is a loss of motor neurons in the lower parts of the brain and all along the spinal cord. One would need to inject cells into all these areas. It is not possible to simply inject the cells into the blood – they would not make it into the brain. A more complicated surgical procedure would have to be used to place the cells in the correct areas.

Even if this problem is solved, the transplanted neuron must now grow and make the physical connections to the muscle cells, not just any muscle cells, but the cells that lost their connections. Assuming that this could be done, it is estimated that the growth of the new connections would likely take a year to complete. Of course, there is also a problem of how the rest of your brain communicates with the new, transplanted cells.

Each of us has conscience control over our motor neurons and this control is mediated by neural connections from our brain. These connections must be recreated in all the transplanted cells. What I am trying to say is that while the use of stem cells, no matter what their origin, has unparalleled potential to treat diseases such as KD, the actual use of stem cells to treat neurodegenerative diseases in clinical practice is years away.

Let me add one more point. One can search the internet and find many sites that advertise stem cell therapy for many different disorders. Some are legitimate and, sorry to say, many are not. At the present time, there are no proven clinical procedures using stem cells that will successfully treat KD. If you see a web page claiming otherwise, you should be very suspicious. Please, talk it over with your physician before you risk your money or your life on such treatments.