Why do some carriers have symptoms?

Normally, women that have the defective gene that causes Kennedy’s Disease are only carriers.  However, we occasionally hear about a carrier experiencing some symptoms … usually later in life.  Hand tremors, weakness in the legs, and difficulty swallowing are the most common symptoms exhibited.

Tuesday, in our KDA Forum, Dan posted a comment that provided a possible explanation.

Here's a quotation from Wikipedia:
"X-inactivation (also called lyonization) is a process by which one of the two copies of the X chromosome present in female mammals is inactivated....The choice of which X chromosome will be inactivated is random in placental mammals such as mice and humans, but once an X chromosome is inactivated it will remain inactive throughout the lifetime of the cell and its descendants in the organism." 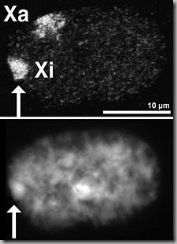 Nucleus of a female cell. Top-left: Both X-chromosomes are detected, by FISH. Bottom-left: The same nucleus stained with a DNA stain (DAPI). The Barr body is indicated by the arrow, it identifies the inactive X (Xi).


The article that Dan references can be found in Wikipedia.  I read the article and it was interesting.

Ed, our resident biology professor, responded to Dan’s finding with the following:

“I am not sure if the X inactivation is the cause of the appearance of symptoms in females. There have been several cases in which both X chromosomes in women are the SBMA form of the gene (this is known as homozygous for SBMA) and these individuals do not show the symptoms as men do and are not really different from women who are simply carriers ( these are heterozygous).

So the jury is still out on this question.  In my opinion, Ed is correct about testosterone being the main factor in causing the severity of the symptoms.  Yet, the “X-inactivation” factor is interesting also.

What do you think is the cause?