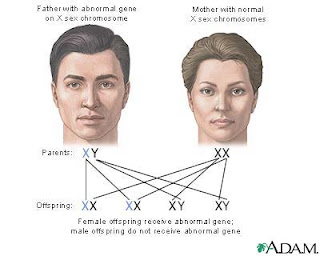 There are so many misconceptions regarding spinal bulbar muscular atrophy, aka Kennedy's Disease. At least a couple of times a month I receive emails asking about who can be passed the gene or if my father has the disease, or can I be a carrier, or if I am a carrier, does this mean my children will also have the defective gene. Because of all the different, but similar questions asked, I feel the need for genetic counseling is almost as important as seeing a neurologist.

Recently I was asked what would be the odds of having both a husband and wife with the defective gene. When I responded that it is possible, but highly unlikely, the person asked another question about how the 50% rule of passing along a defective gene is determined. I pulled the following from the Kennedy's Disease Association web site to use as a starting point:

If the father is the only carrier of the defective gene, your chances of passing the defective gene to a male child are 0 %. However, it is 100 % certain that you would pass this gene on to your female child, and she will be a carrier." 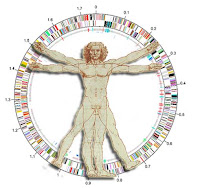 Since there is no internal monitor within the genes that keeps track of whether a defective or normal "X" chromosome was used when an egg was fertilized, researchers and counselors use averages in determining percentages. Out of a hundred cases reported, for example, you could have one case where every child is passed the defective gene. In another case, perhaps only one child is passed the gene. As you average out the number over 100 cases, however, it nears 50%.

Another example using coins might explain it better. A coin comes up either heads or tails when flipped (50-50 chance). If you have 100 people flipping a coin not every person flipping the coin will have a heads one time and a tails the next. Some might have three heads come up in a row before a tail. Conversely, another might have four or five tails come up before a heads. However, when you average out all of the heads and tails that come up for the 100 people, it should be close to 50% for each.

Using my family, for example, where my mother was a carrier three out of seven boys have the defect (43%). Out of three girls, none has the defective gene (0%). For our family, three defective "X" chromosomes (30%) and seven normal "X" chromosomes were passed to the ten children. And, as many times as I heard that all the males in someone's family have the defective chromosome, I also heard as many stories that only one male has it. In poker terms, it could be called the "luck of the draw."

Was it Adam or Eve?

Reference another question that I am often asked; I do not think anyone knows what actually caused the first defect in the gene and when or where it happened. It is very difficult to trace the lineage of the disorder since for many years Kennedy's Disease had been misdiagnosed. It was not until the 1960s that Dr. William R. Kennedy first named the disease. And, all the way to the 1990s it was still commonly misdiagnosed (most often as ALS). Once a simple DNA blood test was discovered, early detection and correct diagnosis has improved substantially.