Symptoms, Diagnosis, and Treatment for SBMA

This is a well written and easy to understand article in Well Written Health. 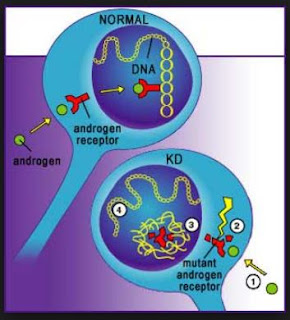 Symptoms, Diagnosis, and Treatment for SBMA


Kennedy disease, also known as spinal bulbar muscular atrophy or SBMA, is an inherited neurological disorder. Kennedy disease affects the specialized nerve cells that control muscle movement (specifically, the lower motor neurons), which are responsible for the movement of many muscles of the arms and legs. It also affects the nerves that control bulbar muscles, which control breathing, swallowing, and talking. Kennedy disease can also lead to androgen (male hormones) insensitivity which causes enlarged breasts in men, decreased fertility, and testicular atrophy.

Diagnosis of the Condition

There are a number of neuromuscular disorders with symptoms similar to Kennedy disease, so misdiagnosis or under-diagnosis may be common.

Often, individuals with Kennedy disease are mistakenly thought to have amyotrophic lateral sclerosis (ALS, or Lou Gehrig's disease). However, ALS, as well as the other similar disorders, does not include endocrine disorders or loss of sensation.

A genetic test can confirm if the Kennedy disease defect is present on the X chromosome. If genetic testing is positive, no other tests need to be done as diagnosis can be made from the genetic test alone. ...

Click on the header link to read the full article.